The beginnings in Boyton, Suffolk

For me, I am almost certain that Boyton in Suffolk is where my story starts on my paternal side.  It could be Woodbridge, about eight miles to the east of Boyton, but more about my indecision later.  I visited Boyton many years ago at the start of my research but that was the wrong time to go because I thought all of my questions would be answered just by looking around the village.  How wrong I was, as anyone who has carried out family history research will know.  I didn’t get many questions answered, but I found myself asking a lot more.  That visit started me on a path which at one time consumed me, and led to me spending a not inconsiderable sum of money on certificates.

The map shown below is the earliest I can find of Boyton and it is dated 1856.  It’s been taken from the Vision of Britain project undertaken by the University of Portsmouth, and they are credited with a link to their website below.  I have found it a very useful resource and I will be adding more maps from them on other pages. 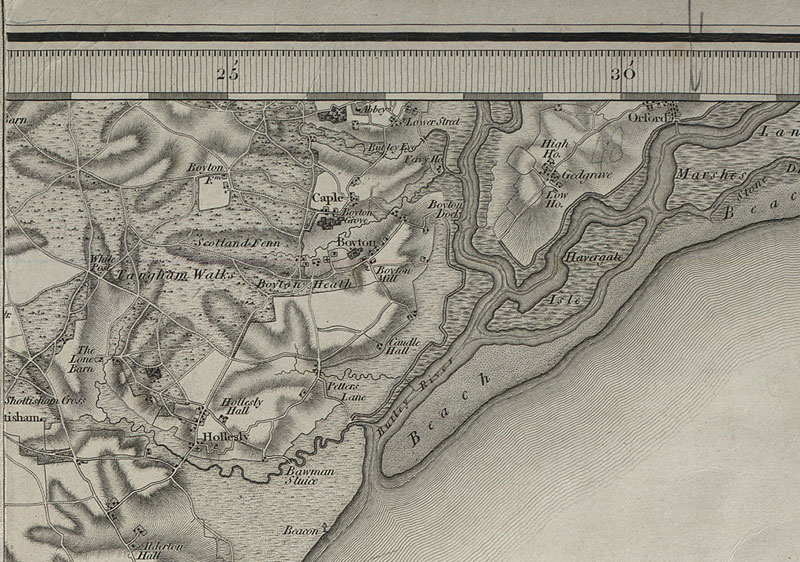 This work is based on data provided through www.VisionofBritain.org.uk and uses historical material which is copyright of the Great Britain Historical GIS Project and the University of Portsmouth

My story of the Pettit family starts with one William Pettit, born 1772.  He is one of my brick walls and I cannot get past him.  You can read more about him by clicking on his name to see all I know about him.  I am sure that he would have recognised this map, even though he died in 1827, some 29 years before it was produced.  Back then Boyton looks to have been a village off the beaten tracks, away from the nearest big town of Woodbridge.  Nothing much has changed over the years, the last time I visited it was still as per the map, a string of houses and cottages along a single entry and exit road.  The is a parish church and some alms houses close by.  The church is where William married his second wife Lucy Buckingham.

Sadly, there is not a lot of published information about Boyton during the period that William and his family were resident.  He was listed as a mariner or seaman in the few documents I have for him, perhaps working out of Boyton Dock on the River Butley. Smuggling was a big thing on the Suffolk coast at the time, he may even have been involved.  I do not think I will ever find out for sure, but I do know that his eldest son John became a master mariner, keeping up the sea going tradition.  At some point in his life he married Jane Mary Philllips and created a new branch of the family in London, mainly centred around Bethnal Green  Eldest daughter Lucy married Edward Whyard, an agricultural labourer. Third child and second son George, an agricultural labourer married Mary Ling in Boyton parish church.  Finally the fourth child and second daughter Elizabeth became an unmarried Mum, a story to be told soon.

If my records are correct, there would seem to be a presence in Boyton from William’s time to the mid-1860s, when Herbert Pettit was the last child born there, final son to the aforementioned George and Mary (Ling).  Other family members were born thrpughout the previous years to George’s siblings, amongst them Ellen Whyard b1840 to Edward Whyard and Lucy pettit before that family moved to Capel St Andrew; Jane Pettit b1843, illegitimate daughter of George’s sister Jane, and George’s other children.  The youngest, Herbert, has already been mentioned, his siblings were Amelia (or Mary) b1847, Susanna b1848, Martha Anne b1850, Horace William b1851, George b1854, Horace b1856, Elizabeth b1858 and William b1861.

It would seem to be the first to move away was William’s eldest son John b1817.  He was a brick wall for many years for me, but another family member, Joyce Taylor, contacted me and gave me a lot of information about him.  Sadly I have lost contact with Joyce, which I regret.  She did tell me that he joined the Navy, and eventually left and went to live in London, starting a large branch of the family.  Most of his family centred around or very close to Bethnal Green.

Other branches were not quite so adventurous, spreading out to the larger towns in Suffolk such as Ipswich, Woodbridge and Wickham Market but no further until the early 1900s.  The family spread even further during the time of both World Wars, and now live in several different countries around the globe.  If you take a look at the Pettit Family list you can see stories about some of the characters in my family.  The list will grow in the coming months.